Secession Could Give California the Reality Check it Needs 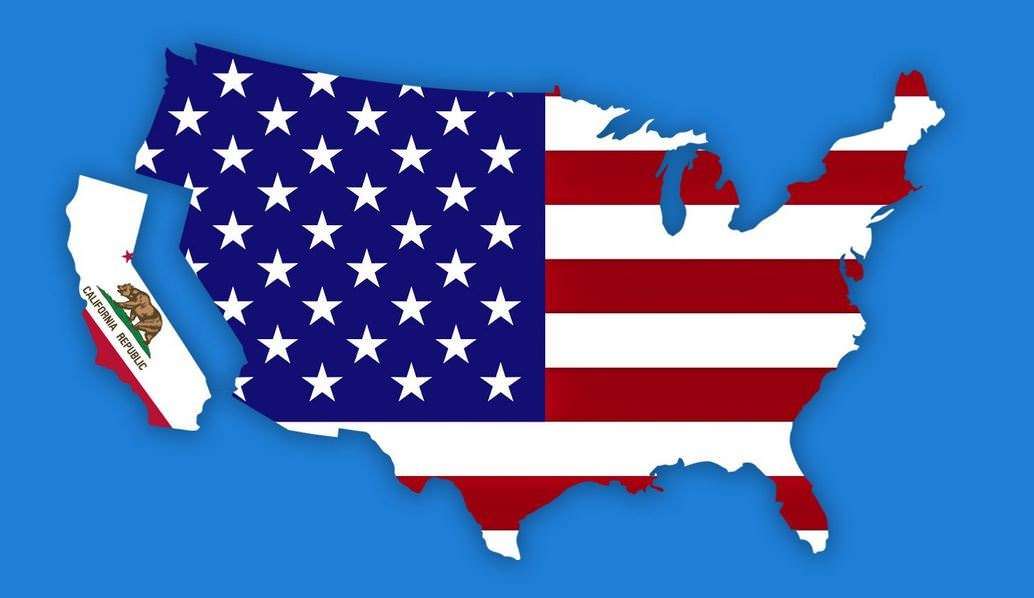 I’m not a big fan of Donald Trump, mostly because I fear his populist instincts will deter him from policies that we need (such as entitlement reform) while luring him to support policies that are misguided (more federal transportation spending). 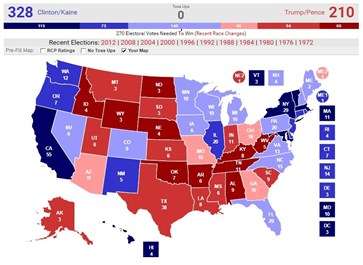 But I admit it’s too early to tell. Maybe my policy predictions on Trump will be as bad as my political predictions about Trump.

And, for what it’s worth, I’ll freely acknowledge that Trump’s election is having a very good effect on my leftist friends. Because they fear the new occupant of the White House, they’re now much more sympathetic to the notion that there should be limits on the power of the federal government and they’re acknowledging that maybe federalism isn’t such a bad idea after all.

Indeed, some of them are so supportive of limiting the impact of Washington that they’re considering secession! The L.A. Daily News reports on a growing campaign in the Golden State.

“Yes California,” a pro-secession group, filed paperwork with the state attorney general in November for a proposed 2018 ballot measure to strike language in the state constitution binding California to the United States. …If its ballot measure succeeds, Yes California would pursue a 2019 vote to declare the state’s independence. …Talk of California secession is nothing new. But it gained momentum after Donald Trump’s election. Hillary Clinton got 62 percent of California’s vote in defeating Trump… According to Yes California, a path to secession exists through the U.S.-ratified United Nations charter.

By the way, I thought cozying up to Moscow was a bad thing now. But since the Yes California crowd is even trying to establish relations with Putin-land, I guess coziness is in the eye of the beholder.

…the group announced the opening of a “cultural center” in Moscow.

Anyhow, the folks at Salon are somewhat supportive of “CalExit.”

…it’s time for the media to stop dismissing the idea as a zany left coast response to the newly elected Republican federal government. …secession could be a reality in our lifetime. …Californians could expect to initiate advanced-level progress in racial justice…free of restriction an independent California could actually demonstrate the success of progressive values in action… It’s difficult to say whether California’s rich Democrats in coastal enclaves would be down with paying reparations if the independent nation were scrapping its ties to the U.S. and its colonial past.

But a column in the L.A. Times by Conor Friedersdorf says statist values would suffer if California became independent.

Blue America would lose its biggest source of electoral votes in all future elections. The Senate would have two fewer Democrats. The House of Representatives would lose 38 Democrats and just 14 Republicans. The U.S. 9th Circuit Court of Appeals, among the most liberal in the nation, would be changed irrevocably. And the U.S. as a whole would suddenly be a lot less ethnically diverse than it is today. For those reasons, Trump, Senate Majority Leader Mitch McConnell, Speaker of the House Paul Ryan, Republicans with White House ambitions, opponents of legalizing marijuana, advocates of criminalizing abortion and various white nationalist groups might all conclude –– for different reasons –– that they would benefit politically from a separation, even as liberals and progressives across America would correctly see it as a catastrophe.

Which may explain why many folks on the right are cheering for secession. Here are some excerpts from another column in the L.A. Times.

…judging by the letters we’ve received from across the country on the burgeoning secessionist movement known as “Calexit,” some readers would be happy see us go — or at least take pleasure in watching our deep-blue state suffer… I have some advice to the sane citizens of California: Members of the middle class should start planning their own exit. When California loses all those billions from the federal government, the politicians are going to need to find money elsewhere, and you know Hollywood’s millionaires aren’t going to provide it. They’ll move to their mountain homes in Wyoming or elsewhere. You think all those new billionaires in Silicon Valley will eagerly part with their money? Think again. They’ll hide their wealth in tax shelters. The refugees and illegal immigrants on the receiving end of California’s generous benefits aren’t going to provide needed tax revenues, so the politicians will target the middle class.

Of course they’ll target the middle class. That’s what they want in Washington. That’s why they want a value-added tax.

Simply stated, you can’t have a cradle-to-grave welfare state unless the middle class is so over-taxed that they have to rely on government for healthcare, education, retirement, and just about everything else. 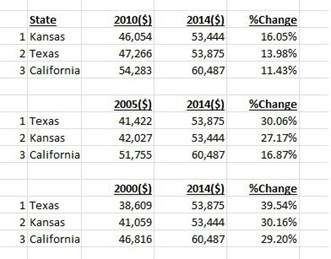 But that’s an issue for another day.

With regard to policy, I think it will be very interesting to see how a state with huge natural advantages (coast, weather, mineral resources, agricultural land, etc) can endure bad policy.

And there’s already plenty of bad policy in the state.

A big part of the problem is that the public sector in California is wildly overcompensated. Kevin Williamson explains.

State and local government spending adds up to nearly 20 percent of California’s economic output, while thriftier states such as Texas and New Hampshire spend less than 15 percent. …California’s government, like the federal government and most other state and local governments, spends its money on salaries, benefits, pensions, and other forms of employee compensation. The numbers are contentious — for obvious political reasons — but it is estimated that something between half and 80 percent of California’s state and local spending ultimately goes to employee compensation. …The first and smaller problem is that many government workers are paid too much. …The second and larger problem with public-sector workers is that there are a whole lot of them. …When politicians talk about “investments,” we think they mean bridges and research laboratories and canals to bring water to central California. But what they are investing in is dependency. In California, that means creating a lot of full-time jobs for Democrats.

But it’s not just that there are too many bureaucrats and that they are overpaid. They also become a big burden when they retire.

Here’s some additional evidence of the mess in California. 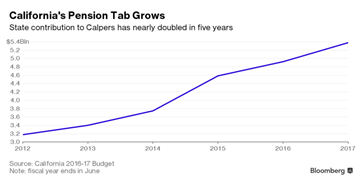 California is already paying $5.38 billion to the California Public Employees’ Retirement System this year, and in fiscal year 2018 the state will need to add at least $200 million more. By fiscal year 2024 the annual tab will increase at least $2 billion from current levels. This all comes on top of increases already scheduled under the system, according to Governor Jerry Brown’s finance department. …California’s revenue is volatile because it draws a large share of taxes from wealthy residents whose incomes are tied closely to the stock market. The top 1 percent of earners — who tend to own shares — accounted for nearly half of the state’s personal income-tax collections in 2014.

…the gap between what Californians pay versus the rest of the country has nearly doubled to about 50%. This translates into a staggering bill. Although California uses 2.6% less electricity annually from the power grid now than in 2008, residential and business customers together pay $6.8 billion more for power than they did then. …“California has this tradition of astonishingly bad decisions,” said McCullough, the energy consultant. “They build and charge the ratepayers. There’s nothing dishonest about it. There’s nothing complicated. It’s just bad planning.”

Victor David Hanson bemoans the outlook for his state.

The state is currently experiencing another perfect storm of increased crime, decreased incarceration, still ongoing illegal immigration, and record poverty. All that is energized by a strapped middle class that is still fleeing the overregulated and overtaxed state, while the arriving poor take their places in hopes of generous entitlements, jobs servicing the elite, and government employment. …Go to a U-Haul trailer franchise in the state. The rental-trailer-return rates of going into California are a fraction of those going out. Surely never in civilization’s history have so many been so willing to leave a natural paradise. …What makes the law-abiding leave California is not just the sanctimoniousness, the high taxes, or the criminality. It is always the insult added to injury. We suffer not only from the highest basket of income, sales, and gas taxes in the nation, but also from nearly the worst schools and infrastructure. We have the costliest entitlements and the most entitled.

Nestlé USA, “the maker of Häagen-Dazs, Baby Ruth, Lean Cuisine, and dozens of other mass brands,” is moving its U.S. headquarters from California to Virginia. It is among many businesses that have left California in recent years. In 2010, Northrop Grumman Corp. moved its headquarters out of California, leaving the state that gave birth to the aerospace industry without a single major military contractor based there. Last Spring, the parent company of Carl’s Jr., founded in Anaheim, California, 60 years ago, relocated its headquarters to Nashville, Tennessee, where there is no state income tax. …reported the San Jose Mercury News in June 2016. “During the 12 months ending June 30, the number of people leaving California for another state exceeded by 61,100 the number who moved here from elsewhere in the U.S., according to state Finance Department statistics. ‘They are tired of the expense of living here. They are tired of the state of California and the endless taxes here,’ said Scott McElfresh, a certified moving consultant. ‘People are getting soaked every time they turn around.’” …For businesses, the worst is yet to come. California is increasing its minimum wage over the next several years to $15 per hour.  …the increase will ultimately cost California 700,000 jobs. An economist at Moody’s calculated that 31,000 to 160,000 California manufacturing jobs will be lost. California taxes may rise further, to deal with a rising state budget deficit over the next decade. The deficit is rising in part due to California’s unusually high state welfare spending which grew about twice as fast in California in 2016 as in the U.S. as a whole. California also spends its transportation dollars very poorly, and it is wasting billions on a high-speed rail boondoggle that few people will ride.

Indeed, Bader’s column illustrates the real reason why CalExit almost certainly will lead to disaster. People and businesses will vote with their feet. 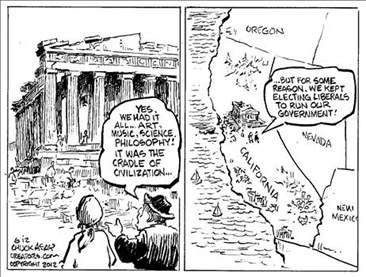 So unless the politicians in Sacramento decide to erect a barbed wire fence around the border (maybe we shouldn’t joke), the state’s feudalistic economic system will be unsustainable.

Continue: Secession Could Give California the Reality Check it Needs | Foundation for Economic Education