Spain Getting Ugly in Catalonia

The Catalonia crisis is accelerating, with Madrid’s crackdown increasing support for independence even among those previously not so disposed. This does not look like it will end well. 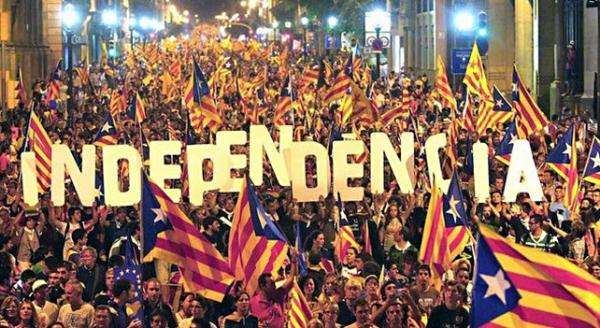 Spain will deploy police reinforcements to the northeastern region of Catalonia to maintain order and take action if a referendum on independence pledged by the Catalan government but deemed illegal by Spain should take place, officials said Friday.

AP reports that an Interior Ministry statement said the extra agents would provide backing for the Catalan regional police who are also under orders to prevent the staging of the referendum.

“I feel the way people used to feel during Franco regime. Nothing less. Because Francoism is still alive,” said protester Josep Selva, referring to Gen. Francisco Franco’s military regime that ruled Spain between 1939 and 1978, three years after his death.

“The political reform of 1978 only legalized Francoism and disguised it as democracy,” he said.

But, as WolfStreet.com’s Don Quijones points out Madrid’s crackdown on Catalonia is already having one major consequence, presumably unintended: many Catalans who were until recently staunchly opposed to the idea of national independence are now reconsidering their options.

A case in point: At last night’s demonstration, spread across multiple locations in Barcelona, were two friends of mine, one who is fanatically apolitical and the other who is a strong Catalan nationalist but who believes that independence would be a political and financial disaster for the region. It was their first ever political demonstration. If there is a vote on Oct-1, they will probably vote to secede.

The middle ground they and hundreds of thousands of others once occupied was obliterated yesterday when a judge in Barcelona ordered Spain’s militarized police force, the Civil Guard, to round up over a dozen Catalan officials in dawn raids. Many of them now face crushing daily fines of up to €12,000.

The Civil Guard also staged raids on key administrative buildings in Barcelona. The sight of balaclava-clad officers of the Civil Guard, one of the most potent symbols of the not-yet forgotten Franco dictatorship, crossing the threshold of the seats of Catalonia’s (very limited) power and arresting local officials, was too much for the local population to bear.

Within minutes almost all of the buildings were surrounded by crowds of flag-draped pro-independence protesters. The focal point of the day’s demonstrations was the Economic Council of Catalonia, whose second-in-command and technical coordinator of the referendum, Josep Maria Jové, was among those detained. He has now been charged with sedition and could face between 10-15 years in prison. Before that, he faces fines of €12,000 a day.

The confiscation of ballots and other vital voting paraphernalia and the detention of key members of the referendum’s organizing committee, together with today’s decision by the Spanish Finance Ministry to completely block the regional government’s accounts — a move that would not be possible without full cooperation of both Spanish and Catalan banks — could be a major setback for Catalonia’s dreams of independence.

Without ballots, voter databases and ballot boxes, organizing a referendum is going to be a tough task, especially if Catalonia’s government no longer has access to public funds. But it will still try. It’s already launched a new website informing the public of the location of voting colleges on October 1. The site replaces dozens of other URLs that have been shut down at the behest of Spanish authorities.

Nonetheless, yesterday’s police operation significantly — perhaps even irreversibly — weakens Catalonia’s plans to hold a referendum on October 1, as even the region’s vice-president Oriol Junqueras concedes. But that doesn’t mean Spain has won. As the editor of El Diario, Ignacio Escolar, presciently notes, yesterday’s raids may have been a resounding success for law enforcement, but they were an unmitigated political disaster that has merely intensified the divisions between Spain and Catalonia and between Catalans themselves.

Each time Prime Minister Rajoy or one of his ministers speak of the importance of defending democracy while the Civil Guard seizes posters and banners related to the October 1 vote and judges rule public debates on the Catalan question illegal and then fine their participants, a fresh clutch of Catalan separatists is born.