Immediately on the heels of the Iraqi Kurdistan “yes” vote, the Iraqi parliament approved sending troops to the disputed Kirkuk region to prevent the Kurdistan Regional Government (KRG) from taking full control of the oil-rich area. Preliminary official results out Wednesday indicate a 92% vote in favor of Kurdish independence. A written statement produced by Baghdad said the decision aims to protect Iraqi citizens residing in the contested area between Baghdad and Erbil. But the decision is also no doubt motivated by protection of Kirkuk’s multiple oil and gas fields, which Baghdad has now ordered the KRG to hand over, including all other oil facilities throughout northern Iraq.

The KRG held its deeply controversial referendum on Kurdish independence Monday, which as expected resulted in a “yes” vote to declare the autonomous Iraqi region a new state. Kurdish leader Masoud Barzani announced the results of the referendum on live TV Tuesday, while attempting to ease tensions by urging “serious dialogue” with the Baghdad government instead of threats of sanctions and troop presence. Barzani further warned Iraqi Kurds of “facing hardships” while also pleading with world powers to “to respect the will of millions of people”.

Currently, Israel is the only country which has voiced public support for Kurdish independence – something which has earned the condemnation of Turkey, Iran, and others in the region. Israel stands accused of using the Kurds of to Balkanize Iraq and the broader Arab region.

Turkey for its part has come close to warning Israel that it could cut diplomatic ties should Israel continue in its public support of an independent Kurdistan. This week Turkish President Recep Tayyip Erdogan warned, “If they do not review, we cannot take a lot of steps that we were about to take with Israel” – to which Israeli lawmakers responded that such threats were “empty”. 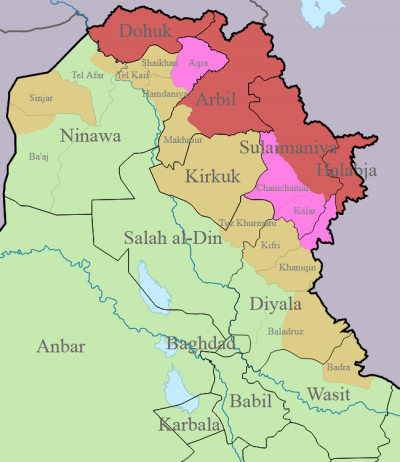 But Erdogan had more direct and harsher words for Kurdish leadership, saying in a televised speech Tuesday that, “If Barzani and the Kurdish Regional Government do not go back on this mistake as soon as possible, they will go down in history with the shame of having dragged the region into an ethnic and sectarian war.” While referencing what appears to be an emerging Israeli-Kurdistan open alliance and mutual support, Erdogan further stated, “Who will recognize your independence? Israel. The world is not about Israel. You should know that the waving of Israeli flags there will not save you.”

Both Iran and Turkey have amassed troops and significant military hardware along their borders with Kurdistan, including tanks which are participating in war games as a show of force. Iraqi troops have reportedly joined Turkish troops in conducting joint military exercises in the region. As we previously reported, Iran immediately closed its airspace to the two international airports located in territory administered by the KRG, and Baghdad has demanded that these be handed over as well.

The Baghdad government has further declared closure of airspace over Kurdish northern Iraq, prompting some regional carriers to indefinitely suspend flights into Erbil. Lebanon’s Middle East Airlines (MEA) was the first to announce it would be suspending flights “until they solve the issue.” And Royal Jordanian, FlyDubai, Turkish Airlines and EgyptAir are among the latest to join the growing list. Iraqi PM Abadi has given the KRG three days to surrender not only the airports, but all land crossings as well. Border crossings into Syrian Kurdis areas of Syria have reportedly been kept open by the KRG and/or Kurdish militias administering the crossings.