Secession is as American as apple pie 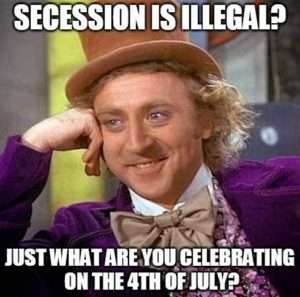 As the European Union struggles under the reality and threat of countries or regions leaving it (as discussed in “Humpty Dumpty in slow motion”), it might be thought that the United States of America represents a haven of stability. But the Southern Confederacy was not the first or last word on secession, which history shows is as American as apple pie, writes Joseph E Fallon..

The United States was founded upon the concept of secession. Not once, but twice. First, in 1783, when colonies seceded from the British Empire. Second, in 1788, when states seceded from the United States. From 1788 to 1861, it was recognized by such leading political figures as Thomas Jefferson, Alexander Hamilton, James Madison, father of the U.S. Constitution, and John Quincy Adams that a state or a group of states, North, South, East, or West, had the legal right to secede from the Union, if their citizens so wished.

In 1783, by the Treaty of Paris, London recognized the independence of 13 colonies, which banded together as the United States of America. Their constitution was the Articles of Confederation and Perpetual Union. It required unanimous consent on political decisions. Article XIII declares – “the Articles of this confederation shall be inviolably observed by every state, and the union shall be perpetual; nor shall any alteration at any time hereafter be made in any of them; unless such alteration be agreed to in a congress of the united states, and be afterwards confirmed by the legislatures of every state.”

In 1787, a Constitutional Convention was called by the Congress of the United States “for the sole and expressed purpose of revising the Articles of Confederation and reporting to Congress and the several legislatures such alterations and provisions therein as shall when agreed to in Congress and confirmed by the States render the federal Constitution adequate to the exigencies of Government and the preservation of the Union.”

Constitutional Convention was held in Philadelphia, PennsylvaniaÂ from May 25 to September 17, 1787.

The convention drafted a new constitution in violation of the expressed legislation authorizing the convention only to propose amendments to the Articles of Confederation and Perpetual Union, making the drafted document illegal.

The proposed constitution was unconstitutional, since it sought to replace the Articles of Confederation and Perpetual Union, the existing government, without unanimous consent.

Rhode Island boycotted the convention. Lacking attendance by all the States in the Union raised a question of the legitimacy of the Convention at the very start.

Seventy delegates were appointed by the twelve States willing to attend the Convention, but fifteen (20 percent) of those appointed refused to do so.

The proposed constitution stated in Article VII – “The Ratification of the Conventions of nine States, shall be sufficient for the Establishment of this Constitution between the States so ratifying the Same.”

The nine states ratifying the new constitution seceded from the government of the United States under the Articles of Confederation and Perpetual Union to create a new government, and for two years, a new country with new borders. Soon 11 of the 13 States ratified the new constitution. North Carolina and Rhode Island, at first, refused to join the new union, and remained sovereign, independent republics until 1789 and 1790 respectively..

This secession by 11 states and the independence of North Carolina and Rhode Island was justified by James Madison, in The Federalist No. 43:“What relation is to subsist between the nine or more States ratifying the Constitution, and the remaining few who do not become parties to it? In general, it may be observed, that although no political relation can subsist between the assenting and dissenting States, yet the moral relations will remain uncancelled. The claims of justice, both on one side and on the other, will be in force, and must be fulfilled…”

Some delegates, however, sought to insert a clause in the proposed constitution prohibiting the future right of secession to States acceding to this new union. They advocated granting powers to the federal government to use force to suppress any future secessions.

Madison rejected the proposal declaring “a union of States containing such an ingredient seemed to provide for its own destruction.”

Alexander Hamilton concurred; writing in The Federalist No. 16: “The first war of this kind would probably terminate in a dissolution of the Union.”

In addressing the ratifying Convention of New York State, Hamilton declared: “…to coerce the states is one of the maddest projects that was ever devised. A failure of compliance will never be confined to a single state. This being the case, can we suppose it wise to hazard a civil war?…A complying state at war with a non-complying state; Congress marching the troops of one state into the bosom of another…Here is a nation at war with itself. Can any reasonable man be well disposed towards a government which makes war and carnage the only means of supporting itself — a government that can exist only by the sword?”

A leader of New England secessionists was U.S. Senator from Massachusetts, Timothy Pickering, who previously served as George Washington’s secretary of state and secretary or war. In 1803, Pickering wrote: “I will rather anticipate a new confederacy, exempt from the corrupt and corrupting influence of the aristocratic Democrats of the South.” U.S. Senator from Connecticut, James Hillhouse, agreed declaring: “The Eastern States must and will dissolve the union and form a separate government.”

President Thomas Jefferson, a principal author of the Declaration of Independence, response to the New England secessionist was one of support. In 1803, Jefferson wrote: “God bless them both, & keep them in the union if it be for their good, but separate them, if it be better.”

n 1804, writing to Dr. Joseph Priestly, President Jefferson declared: “Whether we remain in one confederacy, or form into Atlantic and Mississippi confederacies, I believe not very important to the happiness of either part. Those of the western confederacy will be as much our children and descendants as those of the eastern… If there was a separation in the future, I should feel the duty & the desire to promote the western interests as zealously as the eastern, doing all the good for both portions of our future family which should fall within my power.”

New England States would seek secession from the United States again in 1811 over the admission of the State of Louisiana into the Union, and again in 1814-1815 over “Mr. Madison’s War” (The War of 1812) at the Hartford Convention.