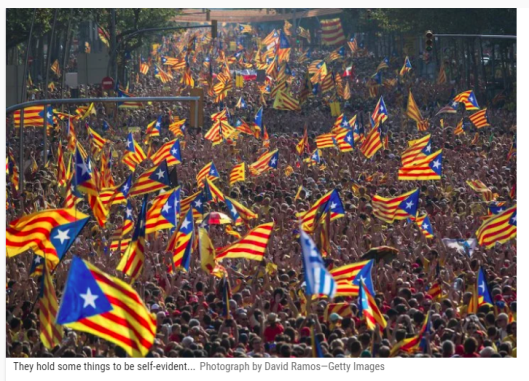 As MishTalk’s Mike Shedlock details, the Catalan president described the raids as a “co-ordinated police assault” and a “de facto state of emergency”.

Spanish national police have stormed ministries and buildings belonging to Catalonia’s regional government to put a stop to the region’s independence referendum.

At least twelve Catalan officials are said to have been arrested, including the chief aide to Catalonia’s deputy prime minister, Josep Maria Jové. The arrests come as the mayors of Catalan towns who back the referendum were yesterday questioned by state prosecutors.

Pro-independence crowds have formed outside the regional ministries in support of the provincial government and in protest against the raids and searches.

Speaking at lunchtime Carles Puigdemont, the president of the Catalonian government, said the Spanish government had “de facto suspended” home rule in the province.

Spanish Assembly Rejects Use of Force

The tactics of prime minister Mariano Rajoy have not won him any popularity contests.

The Spanish national assembly on Wednesday rejected a motion to support the Spanish government’s heavy-handed response to the the referendum by 166 votes against to 158 in favor, after the centre-left opposition party PSOE teamed up with left-wingers Podemos and smaller separatist parties in the parliament.

After news of the raids broke on Wednesday, separatist political parties, as well as Podemos, cancelled all their planned political events for the rest of the day.

“It is unacceptable for there to be political prisoners in a European democracy. The Partido Popular leads us to an authoritarian regression that cannot be tolerated,” a spokesperson for Podemos said on social media.

The Catalan president has accused the Spanish government of effectively suspending the region’s autonomy and declaring a de facto state of emergency. Police officers raided Catalan government offices on Wednesday and arrested 12 senior officials in a bid to stop an independence referendum being held in less than two weeks’ time.

Carles Puigdemont described the raids as a “a co-ordinated police assault” that showed that Madrid “has de facto suspended self-government and applied a de facto state of emergency” in Catalonia.

Speaking after an emergency ministerial meeting, Puigdemont vowed the poll would go ahead, adding: “We reaffirm our peaceful response. The Spanish government has crossed a red line and become a democratic disgrace.”

Mayor Colau is against independence but she does want to allow the vote.

What if Britain treated Scotland the way Spain treats Catalonia?

UK MP Daniel Hannon hits the nail on the head with his Telegraph piece on Europhiles.

Imagine that, instead of agreeing terms with Alex Salmond on an independence referendum, David Cameron had prosecuted him. Suppose Tory MPs had called for troops to be deployed to prevent a vote, and for Scots to be Anglicised. Scottish voters would have felt, with justice, that they were being treated as conquered vassals and the United Kingdom would have cracked apart.

Incredibly, Spanish conservatives are taking this line on Catalonia. For many on the Spanish Right, hostility to separatism is the core of their beliefs. They justify their inflexibility by pointing to the letter of the constitution, which forbids such plebiscites, but their motive is more atavistic than legalistic. Paradoxically, they are creating the very thing they purport to oppose. You persuade people to stay by making clear they are free to leave.

Rajoy’s tactics have done nothing but drum up support for independence.

In Catalonia’s case, the regional government says that Madrid shortchanged it by somewhere in the range of €11 billion to €15 billion in 2011 (between €1,500 and €2,000 per capita), depending on how one does the calculations. The central government countered by saying the gap was only €8.5 billion.

By the Spanish government’s own admission, Catalonia is shortchanged.

Those are 2011 numbers, from a 2015 article in Fortune, but I have seen nothing more recent.

A September 2017 BBC article, referenced below, mentions the same numbers.

“With its own language, a recorded history of more than 1,000 years as a distinct region, and a population nearly as big as Switzerland’s (7.5 million), Catalonia’s claim to nationhood is serious.”

The above snip from the BBC report Catalonia’s Collision Course with Madrid.

I support that view. More importantly, so do 700 mayors in the region.