The Catalan stand-off has been extended until Thursday as both sides hold their ground.

After days of expectation and talks with his separatist allies, Catalan leader Carles Puigdemont stood by his decision to keep his region’s declaration of independence from Spain “in suspension” despite a demand for clarity from Spain prime minister Rajoy, effectively challenging the central government to follow through on promises to forcibly take control of the region by sending an evasive reply to the central government’s Article 155 notification, which on Wednesday began the process of suspending home rule in the region.

The Spanish Prime Minister’s office was seeking a simple “yes” or “no” reply by 10 a.m. on Monday on the question of whether Mr. Puigdemont had or had not declared independence last Tuesday. Anything other than “no”, the First Minister was warned, would lead to the activation of the so-called faced the use of Article 155 of the Spanish constitution. This article is the so-called “nuclear option” which allows Madrid to dissolve the regional government and call fresh regional elections. The central government can also take over the local police force and television channels.

Eventually, Puigdemont chose more obfuscation and defiance: his four-page reply, obtained by Catalan radio stations Catalunya Radio and RAC1 and released by The Spain Report, neither confirmed nor denied he had proclaimed a new Catalan republic last week, but said the declaration remained “in suspension” and proposed two months of dialogue arguing that the Spanish people and Europe will only understand “dialogue, negotiation and agreement.” He did not say what he would do if talks did not take place by the middle of December.

The full letter is below. 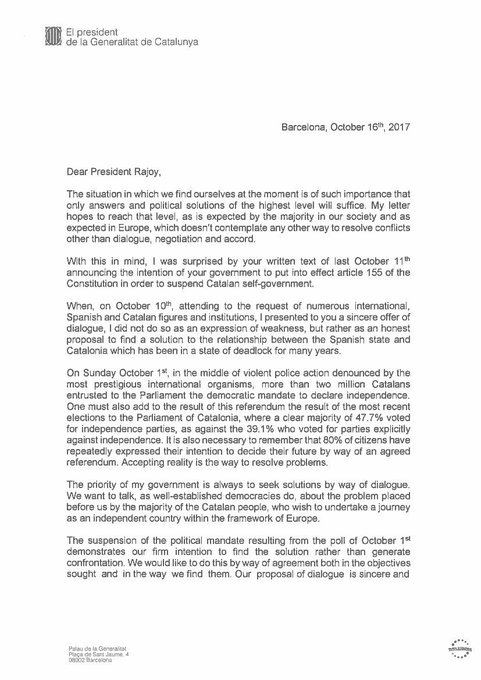 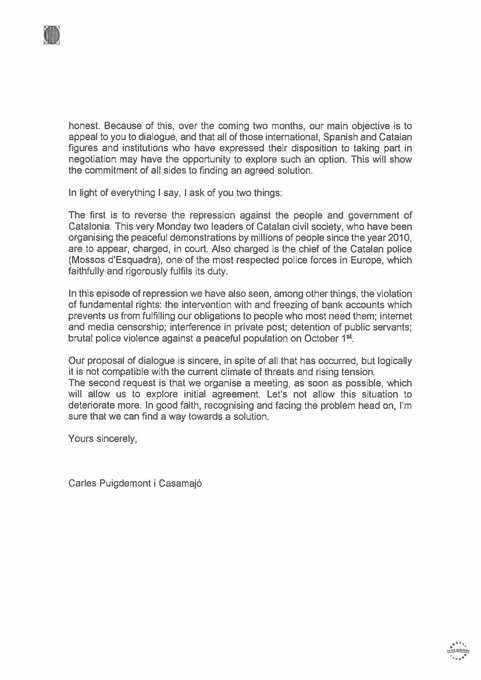 “The situation we are living through”, the letter begins: “is of such transcendence that it demands political solutions and replies that are up to the job”. Both “the majority of society” and Europe would only understand a solution based on “dialogue, negotiation and agreement”.

Puigdemont says he was “surprised” by the central government’s decision to begin the process of suspending home rule, and that his proposal of dialogue was “sincere” and “honest”, not “a demonstration of weakness”. He also argued that despite “violent police action”, “more than two million Catalans” entrusted the regional parliament with a “democratic mandate to declare independence”.

Most “no” voters stayed at home on October 1 and opposition parties refused to take part in an illegal referendum campaign. 90% of those who voted chose “yes”. “The priority of my government is to seek the path of dialogue with all intensity… The suspension of the political mandate that came out of the ballot boxes on October 1 demonstrates our firm will to seek a solution and not confrontation.”

Furthermore, in addition to again not replying clearly to the Article 155 notification, and demanding dialogue with the central government, Puigdemont made two specific requests of Madrid.

In response to Puigdemont’s non-confirmation – and non-denial – Spanish Prime Minister Rajoy said that Puigdemont’s response was a step toward Article 155, while Deputy Prime Minister Soraya Saenz de Santamaria said the Catalan government now has until its second deadlin, at 10 a.m. on Thursday, to disown its claims to a mandate for independence, and that Catalonia can still avert next steps by Spain.

“It is not difficult for Puigdemont to return to a sensible position” by then, said the Deputy PM, framing the Article 155 process as seeking to return legal government to the region rather than suspend home rule, one which aims to ensure regional self-govt is excercised according to law. She also said that Spain regrets that Puigdemont didn’t reply to PM Rajoy’s demand and that the second deadline of Spain’s demand is now activated.

“It has never been easier for someone to avoid the Constitution being applied.”

She concluded that dialogue can only take place within the law, in parliament, and that Puigdemont cannot keep population in uncertainty.