California’s burgeoning secessionist movement has been watching Catalonia’s struggle for independence with an eye toward the future. Proponents of transforming California into an independent republic have pointed out that there are many similarities between Catalonia and America’s largest state. For example, both are relatively wealthy.

However, the circumstances of the two states diverge in one notable respect: The US constitution and California’s state constitution would make it easier for California to secede than Catalonia. 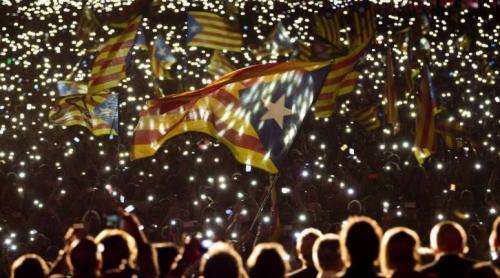 At least, that’s what one leader of California’s largest pro-secessionist group said during an interview with McClatchy.

Catalonia has approached secession in the best way it could, Marin said. If secession is what Californians want, he says their path to independence will be easier thanks to the 10th Amendment to the U.S. Constitution, which says any powers not explicitly given to the federal government are retained by the states. The states cannot unilaterally declare independence, but Marin argues that the Constitution provides the federal government and the states a sanctioned path toward that negotiation.

“There are definitely similarities in the fiscal situation – we both give more than we get back,” said Dave Marin, director of research and policy for the California Freedom Coalition. “But there’s more flexibility in the U.S. Constitution for secession than there is in the Spanish one. California has more tools available to it.”

In a shocking display of police brutality, the government of Spanish Prime Minister Mariano Rajoy forcefully tried to shut down a Catalan independence referendum that took place on Oct. 1 despite being declared illegal by a court in Madrid. Most recently, Catalan Leader Carles Puidgdemont symbolically declared independence before suspending it pending talks with the central government. Meanwhile, Rajoy said Wednesday that Catalonia has eight days to comply with the state’s order to drop its independence bid or Madrid will revoke the state’s autonomy and reassert centralized rule, likely accompanied by a violent crackdown as the rest of Europe backs away.

However, Dave Marin says California can probably find a way to disentangle itself from the US peaceably by employing unconventional tactics.

The first step for Marin’s group is getting an initiative on the 2018 ballot that would repeal a section of the state’s constitution that says California is an “inseparable” part of the US.

“Our state government is very experienced at doing things that undermine the federal government without being unconstitutional,” Marin said, citing California’s sanctuary cities as an example.

The California Freedom Coalition is collecting signatures to get its ballot initiative in front of voters in 2018. It does not definitively say California will declare independence from the United States; it would repeal a provision in the state constitution that says California is “an inseparable part of the United States.” It also directs the governor to negotiate for greater autonomy from the federal government and establishes an advisory commission on California autonomy and independence.

Calls for California’s independence pre-date Donald Trump’s presidency, but his election magnified the movement considerably. Still, most Californians see secession as ridiculous, with only 20% seeing it favorably. Meanwhile, 32% saw it favorably.